I recently attended a talk given by Dr. Lee Klinger concerning Sudden Oak Death. This disease that is most often attributed to the pathogen Phytophthora ramorum, often kills fully grown oaks and tanoaks with no little or no warning. I’ve seen places in the Oakland hills loose up to a third of their live oaks in a single year. At a talk given at the Institute of Noetic Sciences (IONS) Brock Dolman , reported that he lost 80 percent of the tanoaks on his property at OAEC. Millions of dollars are being spent to research the cause of Sudden Oak Death, with the overwhelming majority of this research directed at one thing: combating Phytophthora ramorum. With the assumption that the pathogen was imported by Europeans, and with a disease model approach, these scientists are talking about all kinds of questionable, untested and potentially dangerous solutions such as synthetic fertilizers, toxic fungicides, and genetic engineering. Lee Klinger’s work, being very grounded and results oriented, is a refreshing exception.

Klinger’s model of why the oaks are dying has more to do with forest and ecological health than with a killer pathogen. One key starting point for his argument is that the world’s leading researcher on Phytophthora claims that P. ramorum was was already here when Europeans arrived. That means, the question science should be asking is, why is this pathogen killing the oaks NOW? Klinger has been studying forest decline around the world for decades, and says that what’s happening to these trees is forest succession. Forests, according to current ecology, will eventually grow into peat bogs, being overcome by mosses, lichens, and acidification. The Native Californians in this area used to burn under the trees to keep the soil from going acidic, and to return minerals to the trees. Removing the understory with fire also eliminated the oaks’ competition and ensured that the big trees would grow healthy for hundreds or even thousands of years. The Native Californians also, as shown by the archaeological record, spread ground-up seashells (high in minerals and PH) around the big trees. Salmon who returned key minerals from the ocean back to the land, and the grizzly bears and eagles that spread their carcasses are all but gone. And the more we look, the clearer the picture is that California was one giant garden, managed for thousands of years by indigenous peoples. These practices have virtually disappeared from the land as well, and the forests have been declining ever since. So the reason for oaks “suddenly” dying is several hundred years of abuse and neglect finally taking its toll. Klinger’s solution is to remineralize the soil, and resume these care-taking practices. He’s achieved astonishing results in his trials with this method. The added minerals boost the trees resistance to disease. He specifically recommends an all natural mineral clay called Azomite.

As soon as he said the word, “Azomite” it all made sense to me. The night before the talk, I was researching edible clays at the Weston Price website. They specifically recommended Azomite clay as a mineral supplement and detoxifying agent to be included in the diet. Azomite is fed to chickens, and is approved for organic egg production. It is also recommended to organic gardeners, to increase the minerals in their vegetables. Then the next day, synchronistically, Klinger is saying it’s what he puts on the trees to keep them healthy and combat Sudden Oak Death. Next, he said that he eats it himself. Weston Price found that traditional peoples make stayed healthy by eating a very nutrient rich diet. In the past few hundred years, we’ve lost the majority of the minerals from our soil, and our food is less and less nutritious, even if grown organically. So we have chronic diseases and all manner of health problems and we scramble for cures and spend billions further poisioning the planet to understand what is the cause of all this sickness. Of course, every time someone is diagnosed with cancer, the GDP (Gross Domestic Product) goes up. The reason for all this is pretty simple, actually — lack of essentail nutrition for several generations, and living in a modern toxic soup. 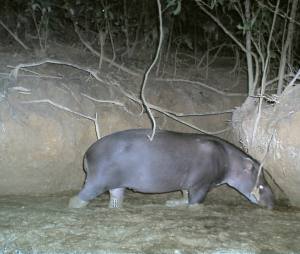 Geophagy is eating of dirt, or clay. It’s practiced by nearly every animal on the planet, and is essential to their health. It provides and assortment of minerals including a full array of trace minerals, and is a miraculously powerful detoxification agent. There are some really cool scenes of clay eating in David Attenborough’s The Life of Mammals. Clay has been eaten by most cultures that have ever existed on the planet, and its use is still widespread today. It is interesting that it is mostly people of modern civilization that no longer practice geophagy. Civilization depletes the soil of nutrients, adds poisons to everything, and has us stop eating clay. We’re the ones that need it the most! Why don’t we eat it? I guess the same reason we race blindly toward the apocalyspe.

Ideally, the plants absorb these amazing minerals from the soil, but according to many, the minerals can be had by eating the clay directly. I recently ordered some edible clay from Terramin. When I opened the container I was instantly drawn to the smell. I stirred a spoonful into my water, and the strangely familiar taste had me coming back for more. Mmmm. Dirt — good!

In conclusion, we need to remineralize our soils, and our bodies. Otherwise, how can we grow strong and raise healthy children? How can we resist disease? The soil, the oak trees, our food, our bodies, it’s all the same thing. Civilization and its cohorts have laid waste to this planet and even as we are finally beginning to clean up its mess, it continues its path of pollution and squandering of minerals and lifeforms, and ways of being. We need to do a few things: 1. Use civilization while it’s still here to remineralize our soils. Otherwise, it’s gonna to be extra hard when shit hits the fan. 2. Stop poisoning and pillaging the planet. Period. 3. Resume land management practices that worked for thousands of years, with our own creative modifications.

You can read more about geophagy in this article by Jared Diamond.