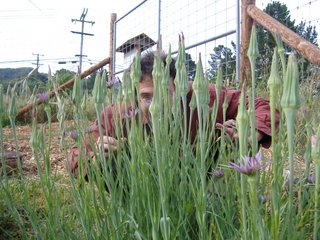 Nearly one year after my last post, I decided to revisit my blogspot. And not really so coincidentally, last March I was talking about salsify, which of course I’m eating right now. As the seasons change, so does my consciousness and often perspective, so it’s good to revisit a record of what I was doing and thinking one year previous. It allows me to see that my path is more consistent than I tend think it is.

About salsify: Botanically known as Tragopogon porrifolius, it is a member of the Asteraceae (Compositae) or Sunflower family. It is often called goatsbeard, because of the big puff created when it goes to seed — just like a giant dandelion (also in the Sunflower family.) Its purple flowers are quite beautiful and its leaves look so much like grass that I often weedwhack it by mistake. When searching for salsify where it likes to grow — often amongst grass, I will virtually assume a stalking posture, as it is so difficult to distinguish from grass. One clue is that when the leaves are broken it exudes a milky sap. Of course, this first requires a pattern recognition that cannot be put into words, or else you’ll be breaking off every piece of grass before finding one that bleeds a while milky substance. These grasslike leaves are edible and in my opinion choice, usually being crisp and somewhat sweet. I have only eaten them raw on the spot, although I’m sure there are many creative recipe possibilities.

The root however, is where it’s at for edibility. Dig it up, wash it, slice it, and bake it at 350-400 degrees in some olive oil. It’s one of the tastiest wild foods I’ve tried, and has been a hit with children and adults alike. It has a somewhat oyster taste to some, giving salsify the nickname “oyster plant.” I think it taste more like a cross between a potato, taro root, and a Jerusalem artichoke. The latter plant, also in the Sunflower family, gives me the worst gas. Salsify roots, even though I’ve chowed down on them for dinner, do not seem to produce the same affect. 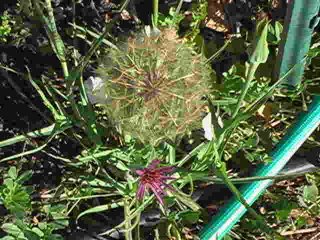 Salsify is a plant that grows wild throughout much of the United States, and its deep taproot is very useful in my garden at breaking up my heavy, heavy clay soil. It is a cool season plant, usually going fairly dormant in the summer heat. The root should also be harvested only after a fairly heavy frost in order to maximize taste. Although we had frosts in the fall and into January and February, the plant doesn’t seem to grow big enough until March. Its cycle is still mysterious to me. The seeds according my sources do not store well at all, so saving them for planting isn’t really practical. So late last spring, I deliberately let many go to seed, often grabbing the seeds and throwing them down on garden beds. I didn’t notice any growth really until late February of the following year, and the plants are much too tiny to eat. The ones I’m digging up now, however, I believe are in their second year. Being biennial, if I don’t dig them up now and eat them they will go to seed in a few months, and then die. The plant’s cycle in my garden is indeed mysterious, as they seem to disappear in the summer and fall and elude my watchful naturalist gaze. They also grow in the adjacent open space grassland with nothing but natural rainfall, but they really thrive in a more disturbed and irrigated garden soil.

I welcome any comments and experiences with salsify, particularly its life cycle.

(the top photograph was taken by Dawn Panda)