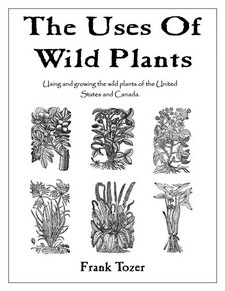 A few weeks ago, I received a copy of “The Uses of Wild Plants” by Frank Tozer. At first I picked it up and decided to read the introduction like a “normal” book. You know, from left to right, top to bottom. That lasted about a minute or so before I realized that the intro wasn’t for me — it many ways it was preaching to the choir. This book was for plant people like myself, so I decided to treat like I would my other plant books — so I started randomly flipping through it and let the plants speak to me through the words and drawings. I was delighted to not only find many plants that I knew, but the book actually contained new information about them! And refreshing was the additional information listed besides just edibility. Tozer lists myriad uses for plants including roofing, firewood, fiber, dyes, and an assortment of others. He even added when necessary uses for beer and fermentation, following the breakthrough work Sacred Herbal and Healing Beers by Stephen Harrod Buhner. (I call these uses, “Buhner stuff,” typically in conversation. )

Another thing that I found refreshing was the inclusion of cultivation details. So often there is a hard divide between what is cultivated and what is “wild” (when no such division in nature exists.) This separation is only a symptom of the extreme disconnect that is rampant in our culture, deeply embedded in our civilization meme. For myself, as a forager and gardener, I not only harvest from the wild, but want to enhance these species in their habitat as well as have them thrive in my garden.
Tozer embraces the “Tending the Wild” perspective in his introduction saying, “Hunter-gatherers around the world realized they didn’t just have to take what nature offered. They could actually increase the amount of wild food available by managing the vegetation to suit their needs. . . What appeared to be a wilderness to the first European settlers, was often a carefully managed and sophisticated system, which enabled food to grow itself with minimal human effort.” Sounds like feralculture and permaculture to me. For those of you who see red flags when people start talking about managing the wilderness, I want to say three things: 1. Intention is important, managing in this case doesn’t mean destroying or reducing mystery, intrigue, and diversity. 2. Our wildlands are already managed (often poorly at that) where unsound logging, poison spraying, and toxic construction are all too common. 3. Humans, by existing as animals at all, naturally affect the ecology they participate in. Chickens garden as Mollison and permaculture people often point out. Deer change the composition of the forest by their browsing habits and excrement. All creatures “manage” their ecology, — their wilderness. I was very glad to see this perspective in this book.

As a reference guide I would have liked the inclusion of more plants in general as well as more attention on entheogens, but overall I think it is a very useful book. And for a plant nerd such as myself, the true test is whether I can get lost in the book for hours on end. “The Uses of Wild Plants” passes this test with flying colors. For me it’s like the “Western Garden” for wild plants. (For those of you that do this work and know this book, you’ve probably noticed that Western Garden doesn’t include many awesome wild plants such as nettle, salsify, cattail, etc.) So for people who work with wild plants as a passion, I recommend this book as an addition to your library.