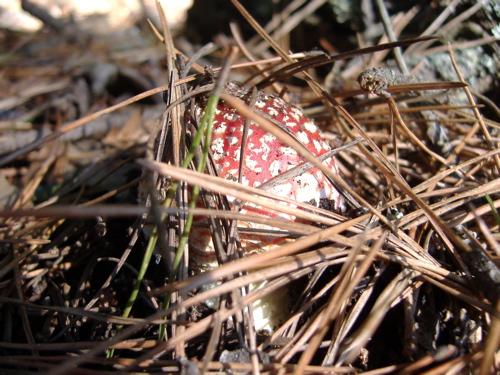 Most people don’t realize it, but the bright red mushroom with white spots, besides being iconic, is actually a real mushroom. It is called Amanita muscaria, or fly agaric, and is one of the easiest mushrooms to identify. In addition to the archetypal red with white spots, this mushroom also has white gills, and a bulbous base (volva) that is usually just below the soil level.

These mushrooms are mycorrhizal, — fungi that grow on tree roots in a symbiotic relationship. They are long lived, complex organisms and are proving to be essential to the health of trees and forest ecosystems. They carry a wisdom and intelligence of the soil and root layers. For more about the amazing nature and potential of mushrooms check out this article that is a nice summation of Paul Stamets’ work.

What does Amanita muscaria have to do with Santa Claus? I’ll give you the short version in more or less of a rant form:

Amanita muscaria is found almost exclusively under pine trees. At Christmas, we look for presents under the tree (usually pine) — We look for these surprise gifts that pop up overnight (like mushrooms sprouting), brought to you by the red and white fellow (A. muscaria.). Wrapping paper for Christmas presents are often red with white dots just like the mushroom. From a mushroom hunter’s perspective, often the bright and easily seen A. muscaria is an indicator of other choice species fruiting in the area such as Porcini (Boletus) and Chanterelles. Also, mushroom hunters specifically look under trees (typically pine) for most of the choice mushrooms. When foraging this time of year, I’ll get what I call my mushroom eyes (scanning the ground everywhere I go trying to see mushrooms to the point where I’ll start seeing pieces of litter as mushrooms.) To an outsider, I would be walking to each tree and looking underneath. What am I checking for — Christmas presents! When I encountered this phenomenon and made the connection in my mind between Amanita muscaria and Christmas, I no longer needed literary proof of this. I just grokked it. It wasn’t that it just made sense — it just was. Since the mushroom is mycorrhizal to pine, pine and similar trees are the Christmas tree of choice. Putting a pine tree in your house and putting brightly colored presents under it is a ritual that is reenacting an ancient ecological relationship. 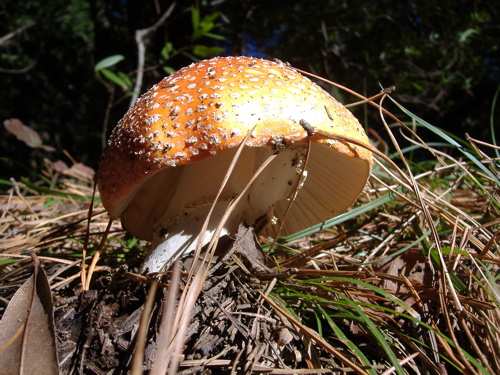 Now, around winter solstice I make it a ritual to go and view these amazing mushrooms and give my thanks to their wonderful presence.
Here in my area of California, the Amanita muscaria fruits right around Christmas and Winter Solstice, last year I saw the biggest fruitings on Christmas Eve, making this connection extra strong for me. Other places, such as in Siberia where the word “shaman” originated, have fruitings earlier in the year. There, the mushrooms are dried, and eaten on the Winter Solstice for entheogenic (shamanic/religious) purposes by certain tribes. Either way, the time is right, the pine tree is right, it all makes complete sense (at least to me), and I haven’t even gotten to the reindeer yet.

In these previously mentioned Siberian tribes, Amanita muscaria is a major part of the culture. Interestingly today, there is still friction between the vodka culture and the Amanita muscaria culture. After ingesting the mushroom, people often report expanded senses of self, spiritual insights, feelings of flying, and enhanced physical abilities. Humans in these Siberian regions (close to the Arctic, you know where Santa Claus lives) aren’t the only species that like the effects of the A. muscaria — the reindeer are also big fans. These reindeer that eat the mushroom are said to behave strangely, often being called “flying reindeer.” They also purposefully drink the urine of people who have eaten the mushroom, as many of the psychoactive compounds are peed out of the body. I can imagine the appearance of the bright red and white mushroom under the pine tree near the north pole, found by an old shaman and eaten. He is then followed by herd of reindeer that soon drink his urine and begin to fly. Sounds like original Christmas Santa deal to me.

The modern Santa Claus is of course, a hybrid of many traditions, including the historic St. Nicholas and scores of commercialized media. But to me, the Amanita muscaria aspect is the most interesting, accessible, and certainly the most ancient of all the hodge-podge that constitutes what we call Santa Claus. He doesn’t just come down Santa Claus lane; he keeps the forest healthy and helps bring you presence. 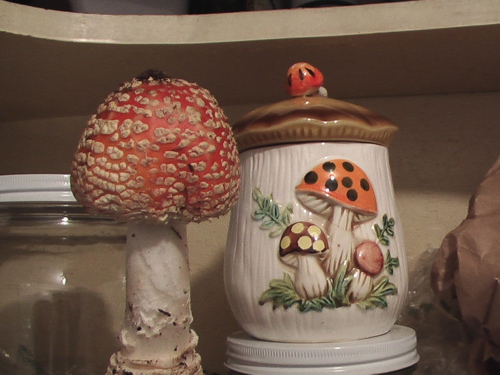 For more information on this topic, you might check out the following articles: “The magical origin of Father Christmas and the Christmas tree” or “Have Yourself a Psychedelic Little Christmas” with some amazing photographs of A. muscaria appearing as a cultural icon.

Warning: I do not suggest ingesting any parts of A. muscaria mushroom. Although I do believe the most solid research demonstrates that it is non-poisonous, it can be physically, psychologically, and spiritually dangerous. I do suggest treading lightly under your local pine trees and taking photographs, touching, sniffing, and admiring A. muscaria. I’ve found that they have a powerful presence to them and that seeing them can be an experience enough!

For more on Amanita muscaria as a food, check out this great piece by William Rubel.

Photographs are copyrighted by Kevin Feinstein 2006.