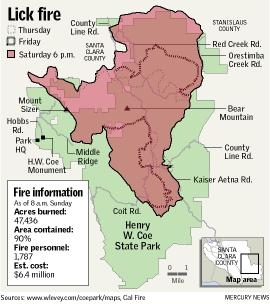 I sit here in my apartment in the city, and don’t know how to feel. Henry Coe Park is a place that I camp at several times each year, — the most beautiful and pristine “wildnerness” around here. And it’s on fire. Of all places to burn in California, why does it have to be my beloved spot? I tell myself I should feel horrible sadness, but instead I feel just confused and on edge. It’s so abstract still, being far enough away that I only read about it on the internet. My mind tries to rationalize away the pain that is building inside me as I see pictures and read reports of the fire’s spread. I think about how when I was there last I understood how fire is a natural part of the landscape, something the plant, animal, and native communities have co-evolved with for thousands of years. Then you hear about how Westerners’ abuse of the land has caused situations in which catastrophic fires burn, which was mostly unheard of before the arrival of the Europeans. This fire suppression and lack of interacting with the land in a strategic way (like the Natives did, see Tending the Wild) has lead to a larger fuel load in so many areas that the fires no longer are nature’s cleansers, but rather destroyers. The soil can even be sterilized, preventing the much needed renewal of fire adapted species (such as wildflowers.) Is this what is happening at Henry Coe right now? I don’t know.

I do hike all around California and see the potential for dangerous fires because of the tremendous fuel load. This overgrowth of brush also leads to reduced biological diversity, leaving an abandoned “wilderness” that has been degraded and fragmented by the recent European invaders. No longer interacting with or being stewards of the land, instead we either develop and destroy what is not considered wilderness, and then leave areas alone to suffer this fate of abandonment. California ecosystems have been used to human interaction (including intentional fire) for thousands of years. The plant and animal communites have come to depend on it many ways. If the land was still inhabited by stewards, small strategic fires would be burned consciously each year, preventing this type of catastrophic fires we see now. Of course, what we have instead are constructs like “wilderness” that are more of a projection of our own unconscious. In this case, it’s this area that is separate from us, that isn’t tainted with our taint (but it is tainted with our neglect). Like an unresolved problem, the fuel load builds up toward explosive catastrophe, which we then bring military bombers and helicopters, and risk the lives of our brave firefighters to try to manage the catastrophe that we’ve somehow created. This is precisely what our culture does in the bigger scheme, which is to let our abused and neglected planet fester until catastrophe forces us to react.

Many will say, “oh, good thing it’s in wilderness, and not near homes.” To me, this is even more tragic. There are millions of homes all around, and there is insurance, but vast expanses of wildlands are rare and precious. There is no insurance for the animals and old trees that are being destroyed right now in Henry Coe Park.

The thing that makes Henry Coe that much more intriguing is its proximity to one of the largest metropolitan areas in the U.S. My confused and saddened mind conjures up many things. One idea that I do not want in my head is that the fire was set on purpose in order perhaps develop the land or build a train rail through the park or something. This would be even more tragic than the fire, and I hope has no basis in truth.

Instead, it should perhaps wake us up to the fact that we are terrible land stewards, and could learn much from re-connecting to the place in an authentic way, and perhaps revive some of the practices that were in place before the arrival of Europeans.

for more information on the fire, go to the Mercury News site.

My heart goes out the land at Henry Coe Park.